Todays show was brought in by Geovarn James, with his new single ‘4AM’. Super-urban, cool, and has hints of 90’s RnB and Frank Ocean in there. Listen here, but also buy on iTunes and support this great, edgy new artist!

On to todays show…

We first saw a Twitter article regarding Vibrant Voice, so we shared it then in a ‘jokey’ kind of way. Now we roll our eyes at those who mock it! It really is revolutionary. And here’s a show to help you see why.

The concept of Vibrant Voice Technique was developed by David Ley. Here’s a little bit of background on him and his partner Elissa Weinzimmer: 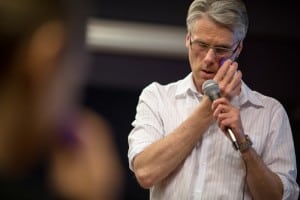 David is a voice coach from Edmonton, Canada, he’d regularly have people coming to him with  vocal issues. An actress happened to come in with some vocal trouble. It had been three or four weeks of roughness, and she was afraid her voice wouldn’t come back. Having been to the doctor she knew it was bad but not worthy of seeing a specialist. When they worked together David began to use massage to relieve tension in and around the larynx, which showed improvement. She tried to massage herself but found it near impossible, so David needed to find a way to break down the muscular tension in a way that she could apply herself. Shortly after, he had a brain wave in the shower (as you do) about how we use vibrations to break down tense muscle all over the body, so could it work for the neck? The search then began for the right kind of vibration ‘tool’, which ultimately led him to an adult shop. There was a drastic improvement so they knew they’d found the right thing, but most importantly it was something she was able to do herself.

Tension in the voice can come from tiredness in the larynx and surrounding muscles. Any singer who has an issue with this kind of fatigue will usually start a process of negative compensation with other ‘non-singing’ muscles. This can leave tension in the muscles of the face, neck and upper body and can have a particularly detrimental effect on the voice. It starts with the age old scenario: your voice is tired so you push harder… and get more tired… so push even harder. Its a bad spiral, and it’s very easy to get locked in a muscular pattern. There’s also a ‘fear’ response (perhaps through nerves) that can happen to us all. There’s one tension that can occur in this feeling: the back of the neck shortens and becomes tight. That contraction affects the larynx, but for voice there has to be freedom in the larynx. Ultimately, the idea of Vibrant Voice is to get rid of tension to keep the larynx free.

“Muscle Tension Dysphonia (MTD) is a nasty case of where tension around the larynx and neck muscles inhibit the vocal cords ability to make sound. It can be really hard to rid if diagnosed late. It may start as just a tired husky voice, but then vocal quality and stamina diminishes quickly. After a couple of weeks you’re potentially locked in the condition. Bad news! MTD at this point requires an undoing of bad vocal habits that you’ve acquired in those tiring situations, and gradually learning new habits and ways in which to use your voice that are more healthy and relaxed.

As a singer you’ll undoubtedly have had some training, so you’ll know what’s going on and can recognise any negative changes in your voice quickly. However, a lot of people can’t spot these signs and don’t know where to start to fix it….

So where do I start?

Tension release – there are certain pressure points to contract and release slowly to move the muscle, i.e opening and closing the jaw while you vibrate the chewing muscles just in front of each ear. This will encourage release if the muscle is tight, and vice versa. It can release hypertension symptoms too.

Enhancement of resonance – For forward placement in the voice, vibrate the cheek bones and top of the skull. This can shift resonance and bring it to the correct placement, which can be felt in the facial structures.”

Where to find David and Elissa

David and Ellisa teach workshops every 2 months. These are also offered online, as well as one to one coaching. They are now in the process of developing their own device with video training, so keep your eyes peeled. Their current tool of choice is on Amazon. Be sure to get Lelo Series 1 (not series 2 as this has a higher amplitude and isn’t as effective!). For the voice nerds, they also run a blog with the science and technique of it all.

You can find them online: