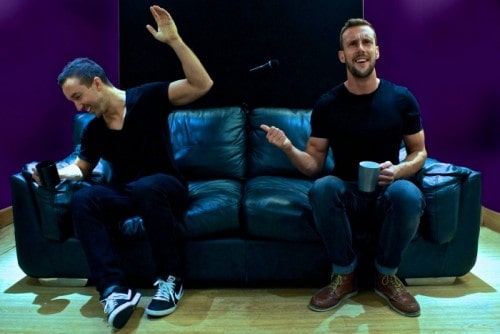 Becoming More Expressive With Your Singing

I don’t know about you, but certain singers over my lifetime have managed to stir up some serious emotion in my stone-like heart. Almost every Michael Jackson album (pre Invincible of course) had me on the verge of telling my 5th year crush that I loved her (by the way, if you’re reading Kate, call me ya?), but then the next track would make me want to head butt my mirror and join a leather-clad street gang. When I got the shout to “SHUT UP!!” from Mother downstairs, the music would go off and I’d return to my more stable and reserved self. 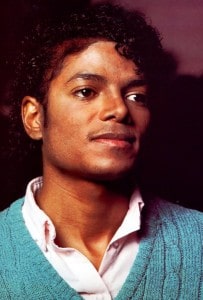 Michael Jackson was arguably the most expressive singer ever. He had a huge repertoire of vocal trademarks that made him king at portraying material in the most connective way. He had grunt, holler and scream. He could be amazingly tender and even cry at the end of a record (She’s Out Of My Life). Heck, he even had improvisational ticks and nonsensical sounds that grabbed every listener despite them being unable to understand what he was even saying half the time. Even on non-improvised lyrics his diction would distort the words beyond recognition.

However, the tone colour and sound of Michaels voice was the overriding factor. Lyrics are obviously super-important and they carry the message of your song, but in Michaels case his insane use of expression managed to communicate to a deeper, more primal level.

I have used MJ as an example of how important it is to explore your voice and it’s capabilities. It isn’t enough to just sing the lyrics to make an impact these days, although there are many singers out there that only do that. The many vocal adjustments that are possible are what really stuffs the point of that song right into the heart of the listener, leaving them feeling like they’ve had an experience. Todays inspirational artists are people like Bruno Mars, Beyonce, Jessie J, James Morrison…. the list goes on.

Not only does the emotive side of singing speak to people on a deeper level, but also the use of a particular vocal quality may give you that element of uniqueness. The thing that stands you out from the crowd and what your raving fans love about you.

The common sticking point with some singers is when it requires you to potentially sound like a total douche while searching for the right amount of whatever vocal quality it is you are trying to achieve. It’s a little bit like being in an acting class if you will. If you have ever witnessed an acting class you’ll know that they get you to hop around like a rabbit and pretend you’re eating grass (or something equally stupid). This isn’t necessarily to prepare you for a role in the Hollywood remake of Watership Down, but rather to break down the barriers of self-consciousness and embrace the task, whatever it is. Everything else is easy after that.

Due to the nature of singers and them often being sensitive souls, self-consciousness is a very common barrier in exploring expression. The song lyrics may need a pepper of cry quality and for that emotion to show in the facial expression, but unless you are an ‘actor’ at that point then you may freeze or feel like you can’t create the sound physically; it just doesn’t happen for some reason. Without the acting approach the likelihood is that you will feel sufficiently stupid or uncomfortable and hence the expressive process is crippled.

Access your emotions, and really exaggerate it to begin

Some of the more extroverted types out there will be able to cry (sometimes with actual tears), laugh or scald on demand. If anything, these guys are at risk of adding too much expression and being hammy or cheesy. But going over-the-top has it’s merits, in the same vein as the acting lessons.

My favourite scene in a movie is when Ron Burgundy is in the ‘glass case of emotion’ in Anchorman. Jack Black has just kicked his beloved dog, Baxter, off a bridge and he is distraught, dribbling and crying in a phone box.

I dare you to do an impression of him and send it in to us. I DARE YOU!! Even if you are shy it will be quite liberating and you’ll probably crack yourself up doing it. 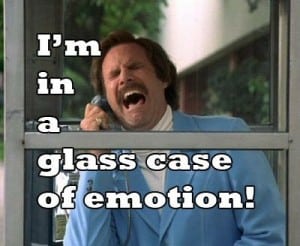 I’ve heard of many people searching for cry exercises online to get the sound perfected but really there aren’t any. If you can wail like the Anchorman then on some level you are able to express on song… you just need to find the right amount of that for the song lyrics.

If you decide to take the Ron Burgundy challenge you will also notice that it is almost impossible to emote to that level without making the corresponding facial expression. The same can be said for singing. If the face ain’t portrayin’ it, then the voice ain’t sayin’ it. I made that up myself [proud]. It is true though, so consider that when trying to create vocal qualities.

To steal the Nike slogan: Just… Do… It.

It really does comes down to just doing it initially. Be aware of what’s holding you back mentally and make the choice to look silly for a second. Be comfortable with being uncomfortable. Smile when you’re happy, cry when you’re sad, and spit when you’re angry.

Once you have the nerve to switch it on and off then it’s time to connect to the material. Know the song and the intent behind it and, if need be, plan your pepperings of emotion by notating the lyrics. You’ll soon be on your way to emotive singing! Make sure you’re on the right track by hooking up with a vocal coach who can assess you stylistically and suggest more or less emotion. Having some helpful ears around can get you to a great sound quicker so take advantage of them.

Some other great artists out there that really tap into emotion are Eva Cassidy, Jazmine Sullivan and Cee-Lo Green. Musical theatre also provides great emotion, and the song With You from Ghost is a terrifically sung piece.

Which singers literally make you break down or jump with joy with their emotion? I’d love to know…