Todays show is brought in by wonderful band, Echotape!

This is also our 1 YEAR ANNIVERSARY episode and who better to bring us in than the big man himself, Dr Ingo Titze! 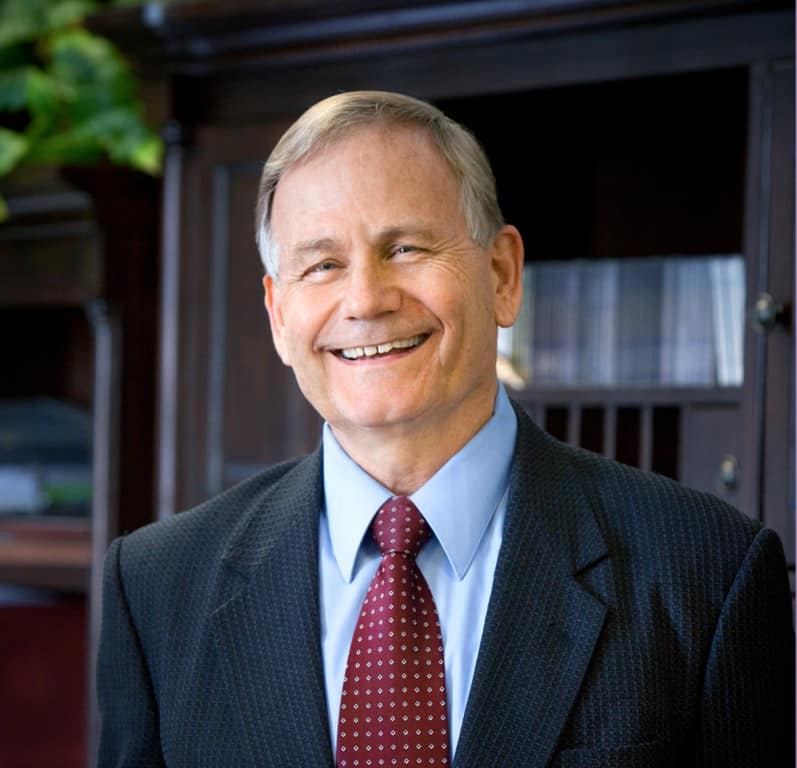 Ingo was born on Germany and got his interests in music from his family being avid singers, and the abundance of classical music on the radio. After emigrating to the US in 1955 his Father encouraged him to go to university to study sciences, as “that was where the money was at”.

From there, Ingo completed an MA in electrical engineering and a PhD in physics but at the same time was taking lessons in his passion: singing. He went to work for Boeing as an engineer but continued his vocal training, which seemed to dominate his mind at every moment.

He had the realisation one day that no physicist had spent much time researching the human voice. So, Ingo decided he would sing and research the voice for as long as he could, applying all his knowledge and delving deep into unchartered scientific territory. He is still doing this to this day!

Question 1: “How does Ingo describe vocal function in a nutshell?”

It begins with lung pressure rising, which drives a flow of air out towards the air ways, vocal cords and vocal tract (throat and mouth). That air passes between the soft walls of the vocal folds, where it creates instability in the way they adduct and close. This instability is called self-oscillation; a continuous ripple in the fold walls, if you like. However, conditions for self-oscillation need to be just right. The approximation (or closure) of the vocal cords, tissue properties like elasticity and viscosity (or suppleness) and the vocal fold surfaces all have to be in the right condition or setting. This can then allow oscillation, or rippling effect. Every oscillation creates a little puff of air excitement that travels in to the throat and mouth above; this is a sound wave!

NB: Depending on the pitch, oscillations can amount to many hundreds per second.

The sound wave is then reflected back and forth off the walls of the vocal tract until it leaves the mouth. That’s what we hear!

Question 2: “How do we create different pitches with this small instrument inside our body?”

The vocal folds are made of several layers of tissue. They are like complex strings, and each layer has the ability to create a different level of tension in the vocal fold. With our muscle coordination we learn to apply the correct lengthening and tensing of these muscle fibres to get the pitch that we want. That’s by no means easy! But, after years of practice we can use the right combination of layers to accurately hit any pitch. 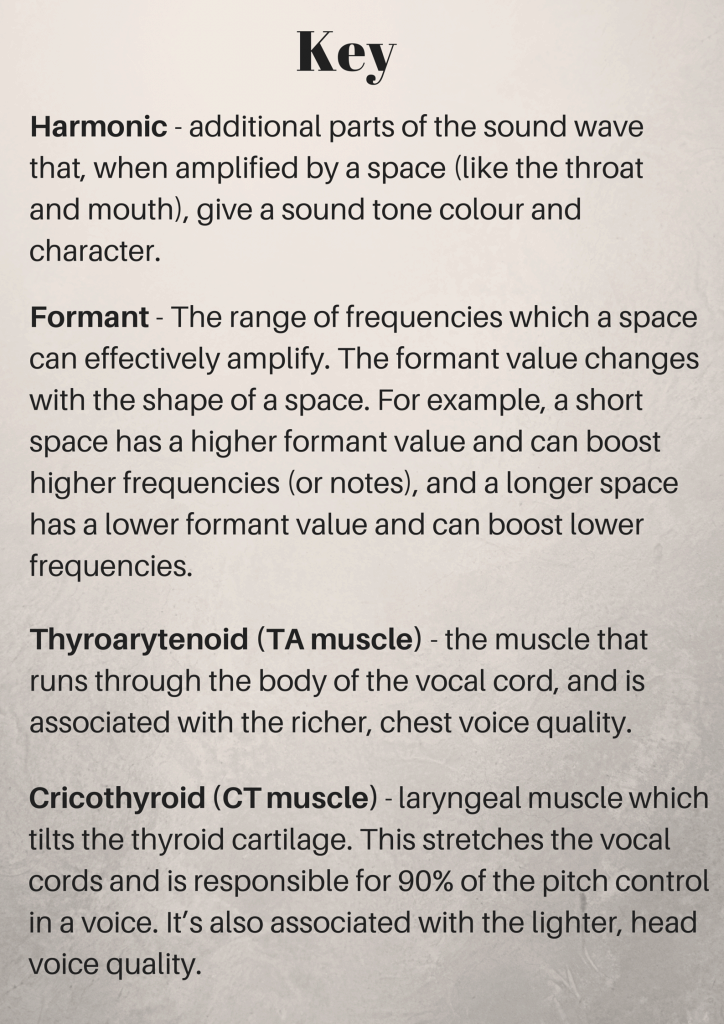 Question 3: “Why is it harder to hit higher notes?”

There is more vocal fold muscle activation involved in reaching higher pitches, so there’s more effort involved. Also, in the higher pitches there’s more interaction between the sound wave and the vocal tract. The reflections that happen inside the throat and mouth can become very powerful and energised, which can help or hinder vocal function. As the shape of the vocal tract affects how the sound wave is reflected, we can use vowels to adjust the shape to help us find the best reflections, and hence energy.

Vowel choices and the way we say vowels need to change as we ascend to keep our vocal tract shape in harmony with the sound wave. Classical singers typically ‘centralise’ vowels towards a more neutral shape, like UH (as in mother), blending every vowel with a shade of UH. This gives the singer the ability to balance on higher notes easier.

For a strong singer, like a theatre belter, there are more limited options for high notes. The vowels A (as in cat) and EH (as in bed) are the only vowels that work well and maintain the belted sound.

Question 4: “What role does larynx movement play in belting?”

Belting is a sound that is characterised by a shortening of the vocal tract at the higher pitches. The shortening creates differences in the sound wave reflections that strengthen a particular rich colour in the tone (for you voice nerds out there, this tone is found through the strengthening of the 2nd harmonic). In order to get this shortening of the tract, a singer must raise their larynx, widen their lips and lower their jaw. This all helps to shorten the tract, tuning in to the belted sound.

Uber Fact: The head to mouth ratio contributes to someones ability to belt to a higher range. Idina Menzel is known for her ability to belt very high, and in a study Ingo found that she had the widest mouth, in comparison to her head side, out of many singers measured. Having this physical benefit means that she has a unique ability to shorten her vocal tract, through mouth widening, giving her the ability to strengthen the 2nd harmonic, and belt, to very high pitches. Giving her the ability to get past the standard D5, which is commonly the end note for most belters, and up into F5 and further.

Muscularly, belting also requires much more contraction of the Thyroarytenoid muscle than in less intense sounds.

Question 5: “What are the pros and cons of a high larynx?”

Ingo has the stance that you should never push the voice into the extreme in one direction for sustained periods. This is possible with many aspects of singing, but here we are considering singers potentially using a maximum larynx height to get a very intense belt sound. This will usually spell problems long term. Singers who use their belted sound for the money notes only are far more able to sustain a healthy career without too many vocal hiccups. On the other hand, if a singer is too conservative with their approach then their sound won’t be exciting enough for the audience, so it’s ok to go to the ‘edge’ every now and again. It’s all about how often you do, and how well you do it.

Question 6: “Can vibrato be taught? Is it natural?”

Vibrato is thought to originate in the brain via the limbic system. The limbic system has an effect on the larynx as it is the part of the brain that initiates emotional responses, such as giggling, yelping, crying etc.

Ingo had conducted a study where he inserted needles in the vocal TA and CT muscles (see key for explanation) and sang vibrato at various rates (frequency measured in Hz, or waves per second). There was very little activation in the vocal muscles creating the vibrato at 2Hz and 3Hz, but as Ingo had created vibrato closer to the normal range of approximately 5 or 6 HZ there was much more activation in the muscles and consistency in the waves.

This led Ingo to conclude that vibrato may start in the limbic system, but the harmony between the vocal muscles takes it on and creates a sharper picture of vibrato.

Can it be trained? Yes. Exercising in the mid range and reducing air pressure from the lungs helps to create a better training environment. Reflexes are part of vibrato, so age has an effect on vibrato frequency. The older the person, the slower the vibrato can become. This can’t necessarily be halted, but you can change the extent of the vibrato, i.e. how much it goes above and below the pitch. A normal vibrato is a quarter tone above and below the pitch you’re singing, with a rate of 5 to 6Hz.

If the extent of the vibrato is larger than that then it may not mean there is a problem. There are singers out there with vibrato that is a tone wide, but anymore than that then the actual pitch becomes hard to determine, and probably won’t sound good.

We hope you found this podcast informative. As always, please do get in touch at tnvquestions@gmail.com if we can help with any more information. We are aware that vocal science can be quite difficult to understand!