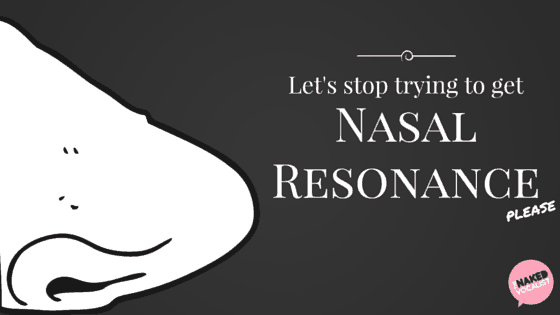 … if you been taught, told or tried to get nasal resonance? Maybe you sometimes hear that the nasal cavities are important resonators for clarity of tone? Either way, if you have then you’re not alone. The idea behind this article is to present the idea that it’s not that important. It could possibly go waaaaaay down your list of priorities. For many in modern pop music, it could also fall off the bottom of that list for good!

That’s a fancy science word. It’s for the measure of the honky, dull sound of true nasality where sound and airflow has been let into the nose by the velopharyngeal port (basically, the bit attached to soft palette) during speaking or singing.

A little sound entering the nose here and there won’t be noticed really. High levels of nasalance makes things sound pretty strange though, and is definitely an undesirable vocal colour saved only for a stereotypical character in ‘I-don’t-know-what’ kind of play. It can be the result of several problems in the voice, such as articulation, palette issues, or throat constriction for example.

If you’re intrigued as to whether your voice is ending up in your nose, just sing a phrase whilst pinching your nose. If your sound changes noticeably from pinched to un-pinched, then there’s some getting in there somehow.

Anyway, I’m not out here to show you how to solve that… plenty of resources online and in-person are already doing a cracking job of that already.

Here we get into the general thought out there on the web about nasal resonance and it’s contribution to good singing tone. Some reputable singing figures and self-named ‘maestros’ are on the band wagon when it comes to nasal resonance. Here are few quotes from the most popular sites on google, using the search term “Nasal resonance in singing”:

“Nasal resonance is the true ring in the voice”. Anon

“It needs to be understood that the nasal cavity plays an important role in the production of a good vocal tone”. Anon

“This bridge point is the area of our vocal range where our instrument is wanting to shift from resonating sounds in the throat through bridges that lead to a nasal resonant space and upper skull resonant space.” Anon

That last one is pushing the boundaries of reality a little.

But here you can see that even the experts (or SEO geniuses possibly) see them as big contributors to tone, as part of the powerful ‘ring’ in the voice, or as the dominant resonator in a vague register of the voice. All of which are researched and have lots of evidence to show that they’re probably… mostly… almost certainly…. not true.

NB: Although in science you NEVER say anything is 100% untrue. You just say “The data strongly suggests” or something like that to suggest your stance… which is what I mean 🙂

A nugget of the dreaded RESEARCH – stay with me

Yeah yeah, I know. How many singers give a sh*t about science? Well, actually more than you think, but still… it’s not enough. However, the boffins of the world help us to understand what’s actually happening in singing, which drives modern vocal coaching forward and helps you guys get more ace, more quickly (editor!!!). 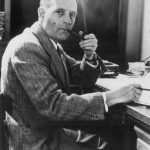 This IS NOT Warren Wooldridge. I have no proof he smoked in the lab.

In a 1957 study, when they were probably still smoking in the lab, Warren B Wooldridge recorded a bunch of subjects singing open vowel sounds normally on a variety of pitches. Then he did the same experiment, but this time with loads of cotton wool blocking and damping the vibrations in their supposedly resonating nasal cavities. Sounds lovely.

After analysis of the normal and blocked noses, his spectrogram results determined there was “no part of the vocal tone which could be described as being a result of nasal resonation”. They were absolutely no different. Even the researcher was surprised in the article, as nasal resonance has been championed since, like, forever. They even played back the recordings to a panel of random listeners and asked them to guess the ones with the cotton blockers. None could do it. I’ll leave you with that for a mo. 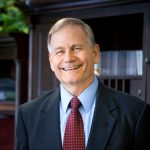 This IS Dr. Titze

In another resource, Dr. Ingo Titze’s book Vocology, he describes nasal resonance to be almost entirely absent in good singing, contributing only a ‘dull murmur’ in the findings.

Functional voice training legend Cornelius Reid mentions nasal resonance in his 1968 book, The Free Voice (link to Amazon). He makes a very good point about the nasal passages as a resonator:

“The nasal cavities are non-adjustable. This being true, nothing much
can be done about improving their capacity for tonal amplification.”

If you’re a nerd, you’ll be into the idea that resonators for voice are only useful if they can continually adjust in order to resonate a wide range of pitches. To quote Mr. Reid again:

“Without adjustable cavities this cannot be done, and there can be no resonance”.

That’s fair enough, but there’s a fairly good reason for that.

When a voice is create vibrant sound waves, the vibrations from these waves are strong enough to be felt through the different parts of the vocal tract (i.e, the throat and oral cavity). So much so that it radiates through bone and tissue around your palette. You may well eventually feel that in your face, nose or somewhere in your head in general.

It doesn’t mean it’s actually resonating or boosting in your nasal cavities, but rather you just feel it at that point on your face. Historically, if a singer felt these facial sensations they might say that they are singing in the ‘masque’. Let’s not talk about that though… that’s for another day and can be quite useful.

I’m not denying that the nose is a useful tool in voice training. Redirecting your voice through your nose, while humming for example, is incredibly helpful in warming up, warming down, treating injury and refining vocal fold coordination. Google SOVT exercises if you want to know more about how that works. But still, the help it gives you IS NOT because it provides your voice with a bag load of extra resonance.

It can be quite the opposite…

Research by Dr. Johan Sundberg also provides an argument for allowing some sound to enter the nose to kill excess energy on one specific, classical sung vowel to avoid the passaggio getting too hairy. He’s essentially saying the nasal cavity works as an anti-resonator. Yes, ANTI.

Another study by US researcher Dr. Nicholas Perna noticed something similar in tenors during the ‘break’ area. After seeing conversations pan out around the article in this Facebook group, some of the tenors major training goal was to avoid nasality altogether by keeping a high soft palette. Interestingly, lab equipment still picked up some signals up in their noses across F4 and G4. Interesting right? Even though the singer had the perception of no nasal flow, there actually was some. Maybe his body chose for him because it needed to?

Conversely, there are singers that describe themselves as highly nasal all the time in my studio. As mentioned earlier, one way to find out if you have sound in your nose is to pinch it. The self-proclaimed nasal singers often pinch and realise they have almost no sound in there at all. That’s because nasality is partly perceptual, and we mistake similar sounds as being nasal when they aren’t. This is the opposite scenario to the tenor!

Other studies (that are yet to be published) have reported totally different results between different singers, different sexes and different voice types.

The nose is an anti-resonator, is non-adjustable, none of the teachers across the ages agree, most research is done on classical voice, the studies show completely different results in different people, singers are none-the-wiser as to whether there is or isn’t any nose involved EVEN when they are sure they have some or have none.

With all that unreliability and uncertainty going on, is it a fruitful endeavour to go prioritising it? As teachers, can we really be sure that nasal resonance strategies are what they seem?

There’s also nothing wrong with a little nose

If we asked Ray Charles, Stevie Wonder or Barbra Streisand to pinch their nose then we might hear a little sound in there. Does that mean we would bust their butts to correct it? Hell no! That’s not the point of any of this stuff. These artists have a signature sound that needs to be preserved. Changing the contribution of nasality in their voice could alter their signature tone too much and I’d be back in the “vocal coach for hire” classifieds.

The real point here is not whether you have some nasality for style or ‘just coz’. It’s more about whether you’re on the hell-bent search for nasal resonance because it will be the key to your technical mastery. IN MY CLINICAL OPINION (#scientificvagueness) it won’t and it isn’t going to be the best use of your time.

If you need any help with nasality, or help figuring out your voice, feel free to get in contact with me for more info.